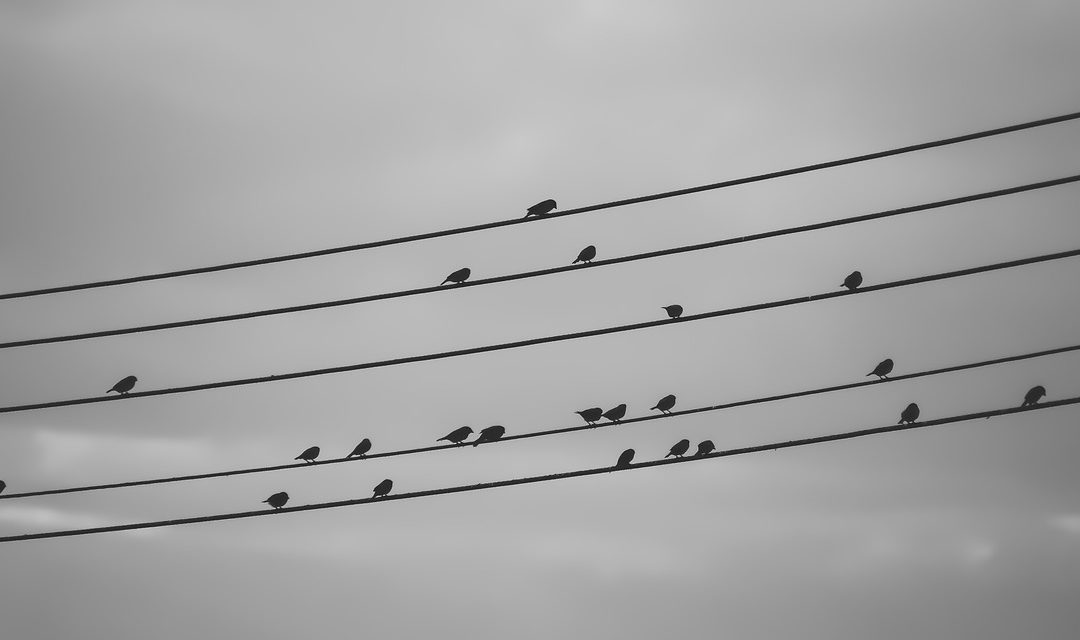 Or, Why birds on a wire remind me of the four types of farmers in a coffee shop

It’s been getting cold here in Minnesota, and I like to observe wildlife and think of what lessons we might draw from their behavior.

I’ve noticed that some electric wires have 10 to 50 birds perched on them, while a wire right next to them have none. Some birds perch close together; others seem a bit stand-offish or may be ostracized, and perch all alone.

When one flies in, some make room by sliding sideways; others leave. Sometimes one leaves and the rest follow. I wonder: Was that a leader? Or was it just a coincidence?

It reminds me of the country coffee shops I enjoy visiting while driving around this great country as I interview the smart, hard-working folks who produce food and fiber and fuel.

Sometimes there are several tables of people who appear to be farmers, talking about markets and yields and tractors. Sometimes you can see four generations at the same table, each obviously happy to be working side by side with their closest kin. (Research shows that’s what makes people the happiest). Other times there’s the lone farmer who comes in, greets the others, but sits alone at the counter. He seems to be there to eat and get on to the next task, with no time for coffee shop talk.

Recently, I have been talking with developers of new agriculture products. There are tons of venture capital being poured into ag technology, but so far, I’ve heard most of it isn’t creating a payback. I think that’s a problem. Today’s markets are tough for new products, and it is even more vital for both developers and farmers that every product meets three main criteria for adoption. But we need to understand first how patterns have changed and who is doing the adopting.

Patterns of adoption have changed since the famous bell-shaped curve was developed in the late 50s. The risks are too great to make a mistake, for farmers, and for marketers as well.

I think there are four types of farmers out there right now, and they are all a little less willing to take a chance than they were when times were good.

There are the radical experimenters. Everybody thinks they’re a little crazy, but they’re also the ones to watch, because sometimes what they do works. They pay attention to really minute details, such as the farmer who mentions microbial activity is necessary to achieve good seed germination, or the one who points out that the CEC ratio has become higher since soil health practices were started.

There are the business leaders. They watch and talk to the radical experimenters, then implement those successful practices on a schedule and a budget. These are the farmers that everyone watches; they are the first to bring a plan to the change. They have the highest yields and the most profits, because they take systematic advantage of new things that work that give them a little bit of an extra edge.

There’s the wait-and-see crowd. But they don’t wait too long anymore. They know that if they wait too long, they will get left behind, so they watch the business leaders very closely. If it works for them, they’ll be on it next season.

Then there are the folks that march to their own drummer. They are a tiny bit of the farmer population, but they are still there. They are the guys that go organic, or raise obscure specialty crops. They might be non-GMO growers or have specialty livestock. They might make their own cheese from their goats.

Now that we have a better understanding of the types of farmers there are, we can talk about what I find to be the three adoption curves: 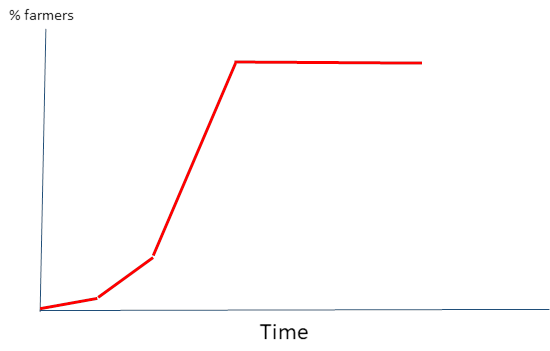 This one is for really successful product innovations; think GMO soybeans and corn. Within five years, 96% of farmers were planting them and still do. 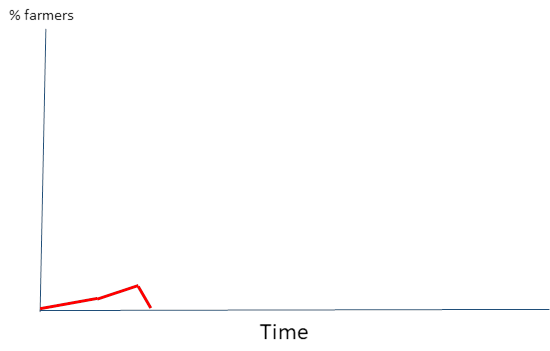 This is for the products that didn’t make it past the experimenters. Perhaps they didn’t live up to promises; perhaps they were too difficult to implement; perhaps they just cost too much for return received. There could have been a lot of money invested in these products that would never be returned because the manufacturer didn’t know farmers’ needs and decision-making processes well enough. 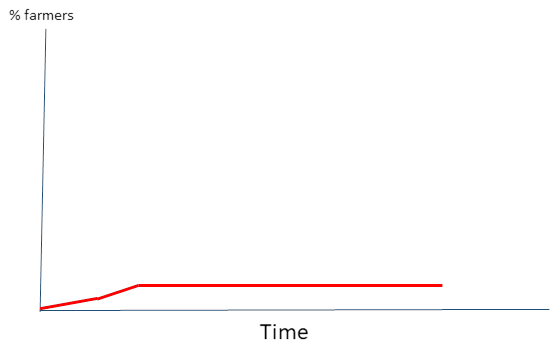 The last curve is of the products that meet the needs of a niche just fine, yet don’t have the ease of implementation, the tangible benefits, and the profitability for any but a select few. They do well for them though.

We help companies understand their prospects, so hopefully their adoption curves are the first or third ones. And the farmer coffee shop talk sounds as sweet as the birds singing from the power lines.